Blueberry Apple Pork Tenderloin & Potatoes is a recipe that will have people thinking you spent a great deal of time in the kitchen. 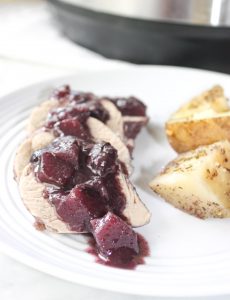 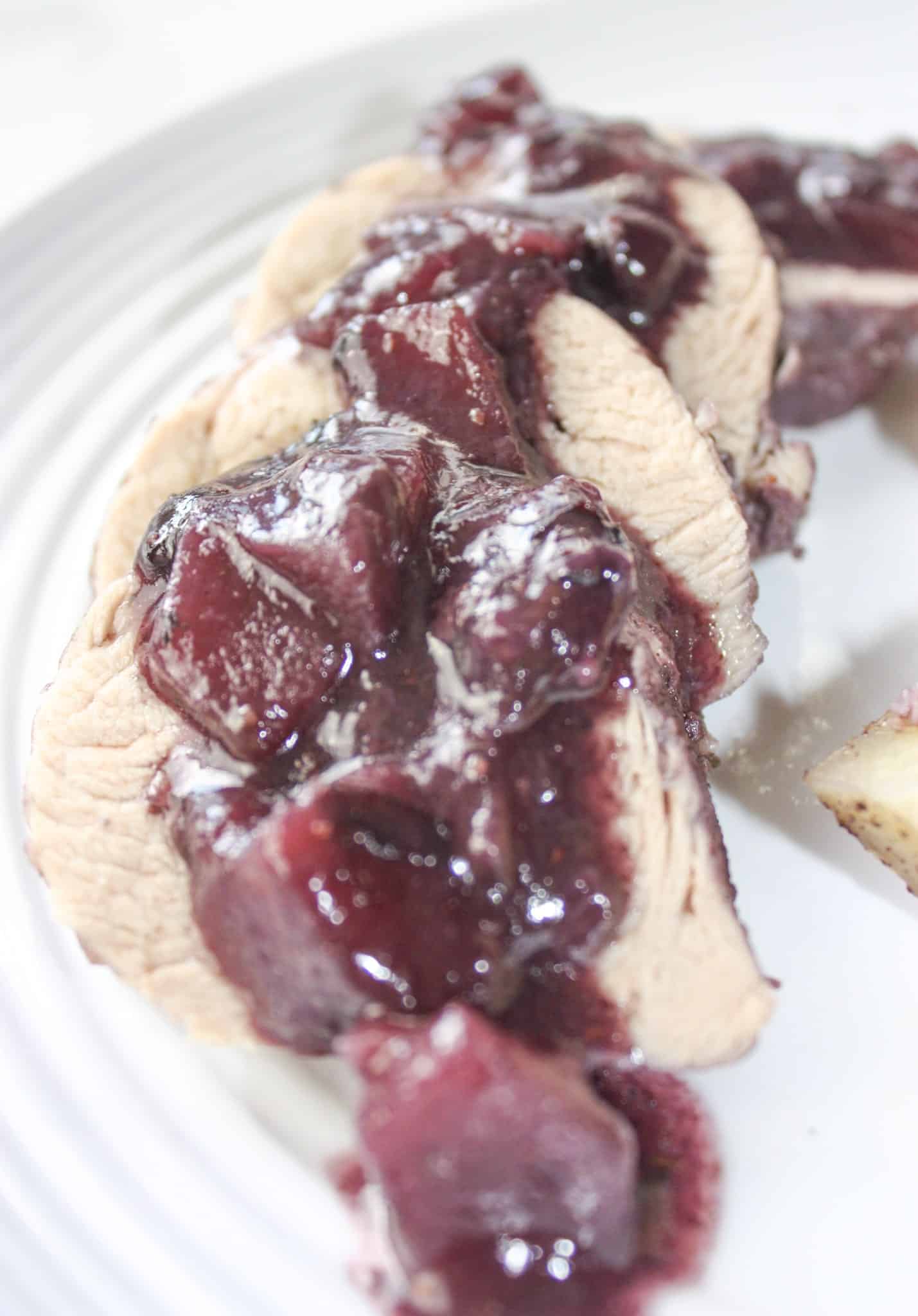 The moist tenderloin is smothered in a blueberry apple sauce while the potatoes are seasoned with dried rosemary and minced garlic. 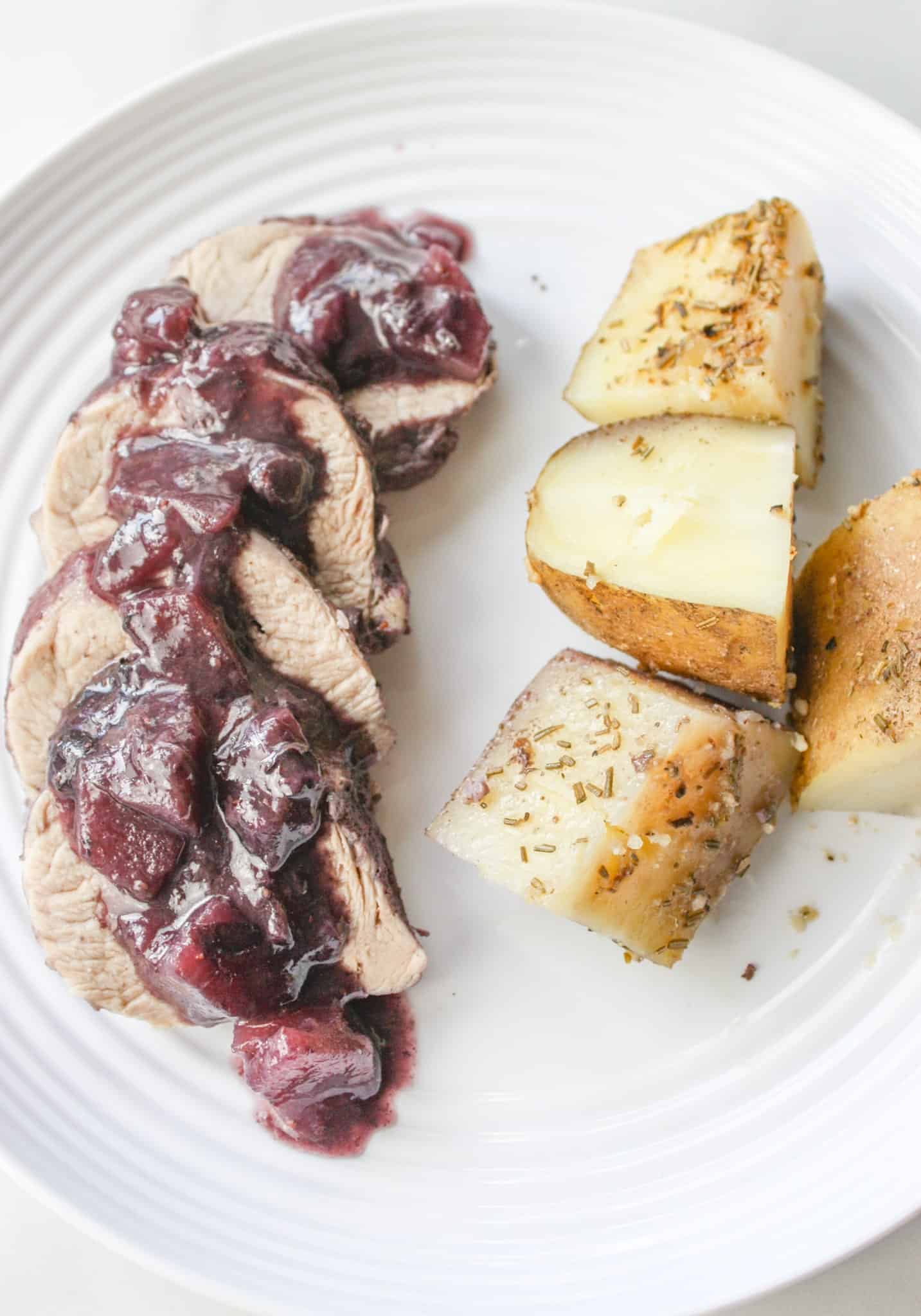 This seasonal sauce will delight your palate with each bite!  It is the perfect pairing for this pork tenderloin. 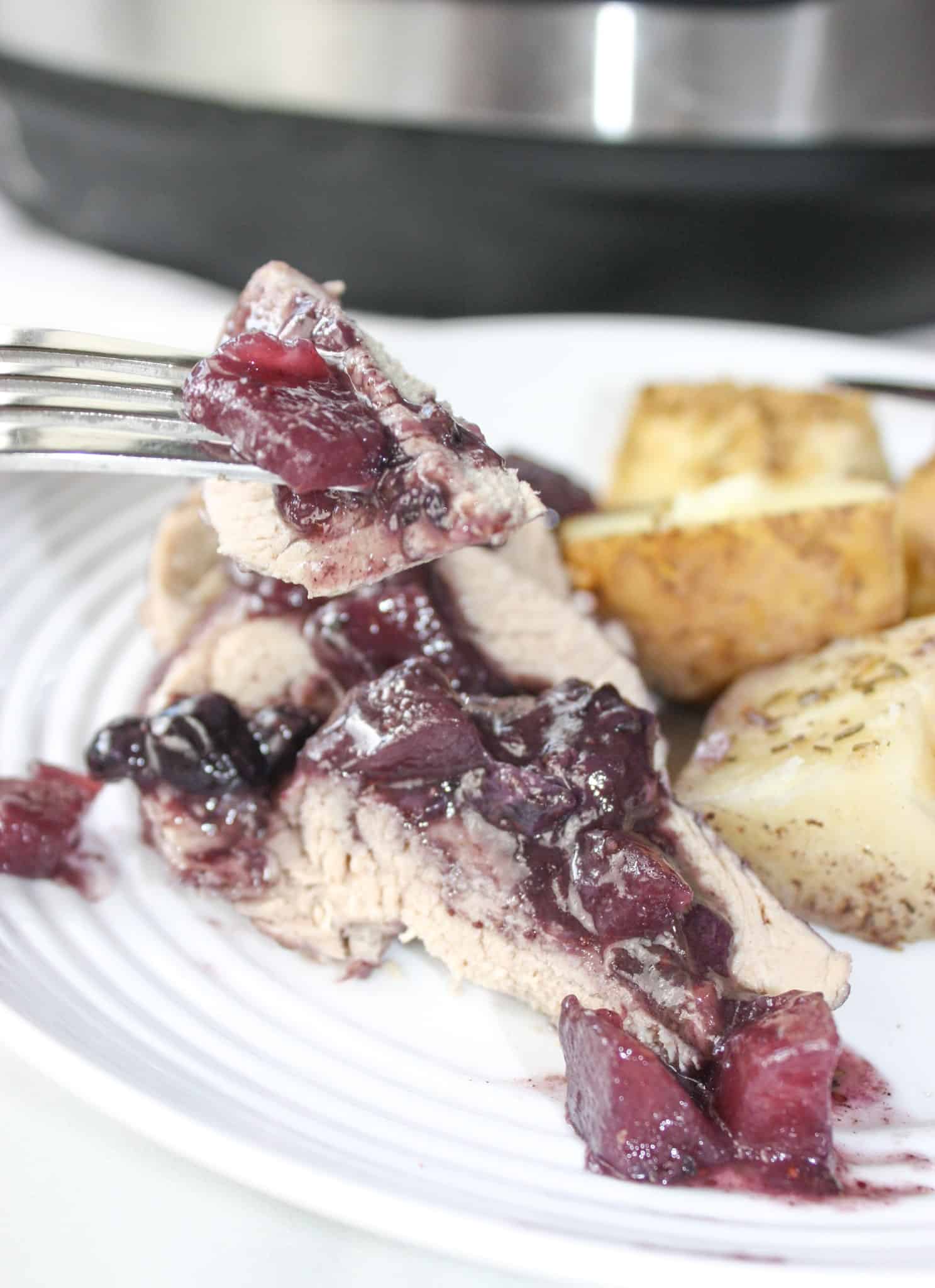 The pork tenderloins I had were very small so I needed to use two to feed everyone.  The first step to making Instant Pot Blueberry Apple Pork Tenderloin was to cut the tenderloins in half so they would be easier to arrange in the Pot. 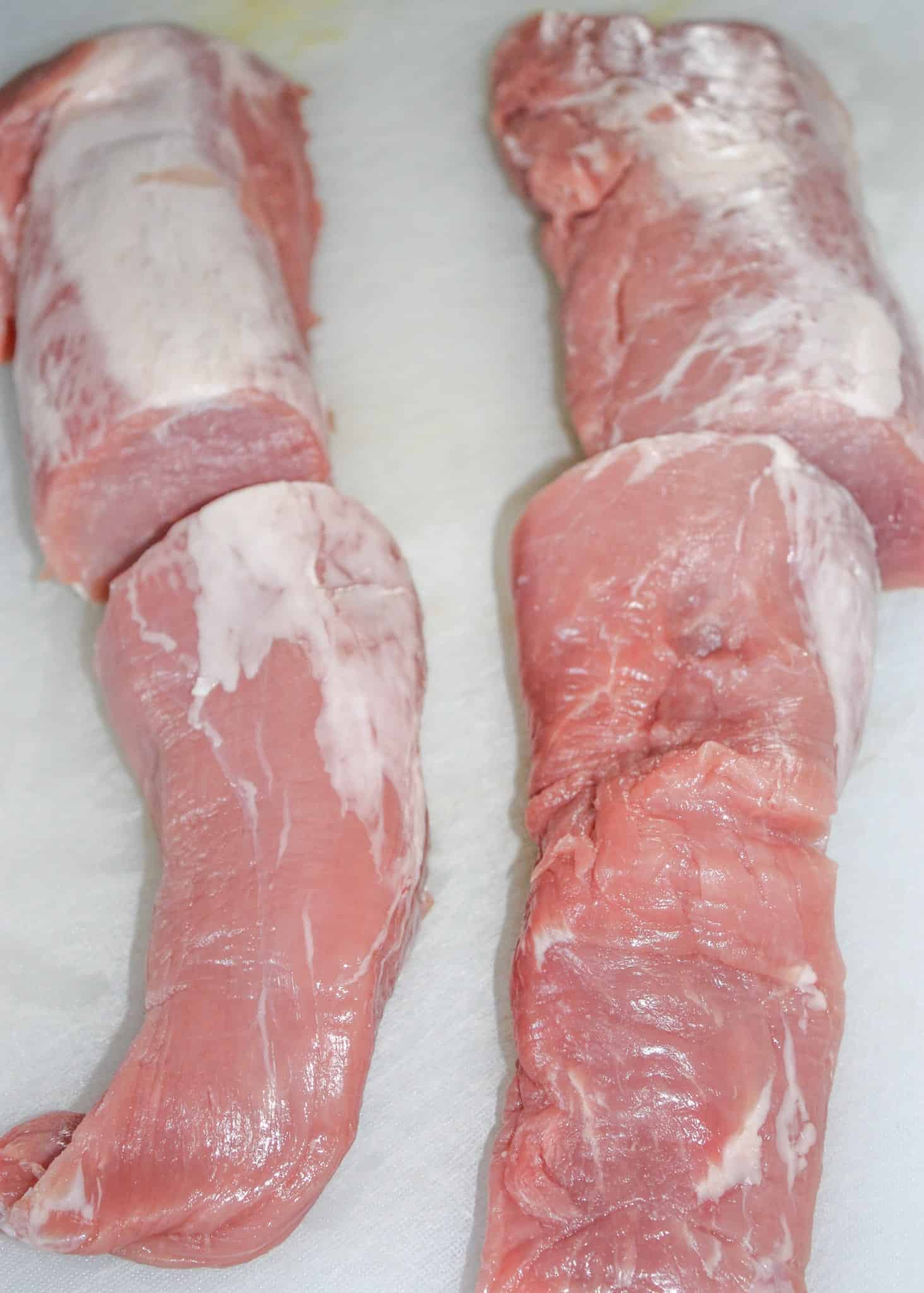 I also cubed 6 potatoes and cut up an apple.  I placed the potatoes in an Instant Pot cake pan and seasoned them with dried rosemary and minced garlic.  The apple I set aside. 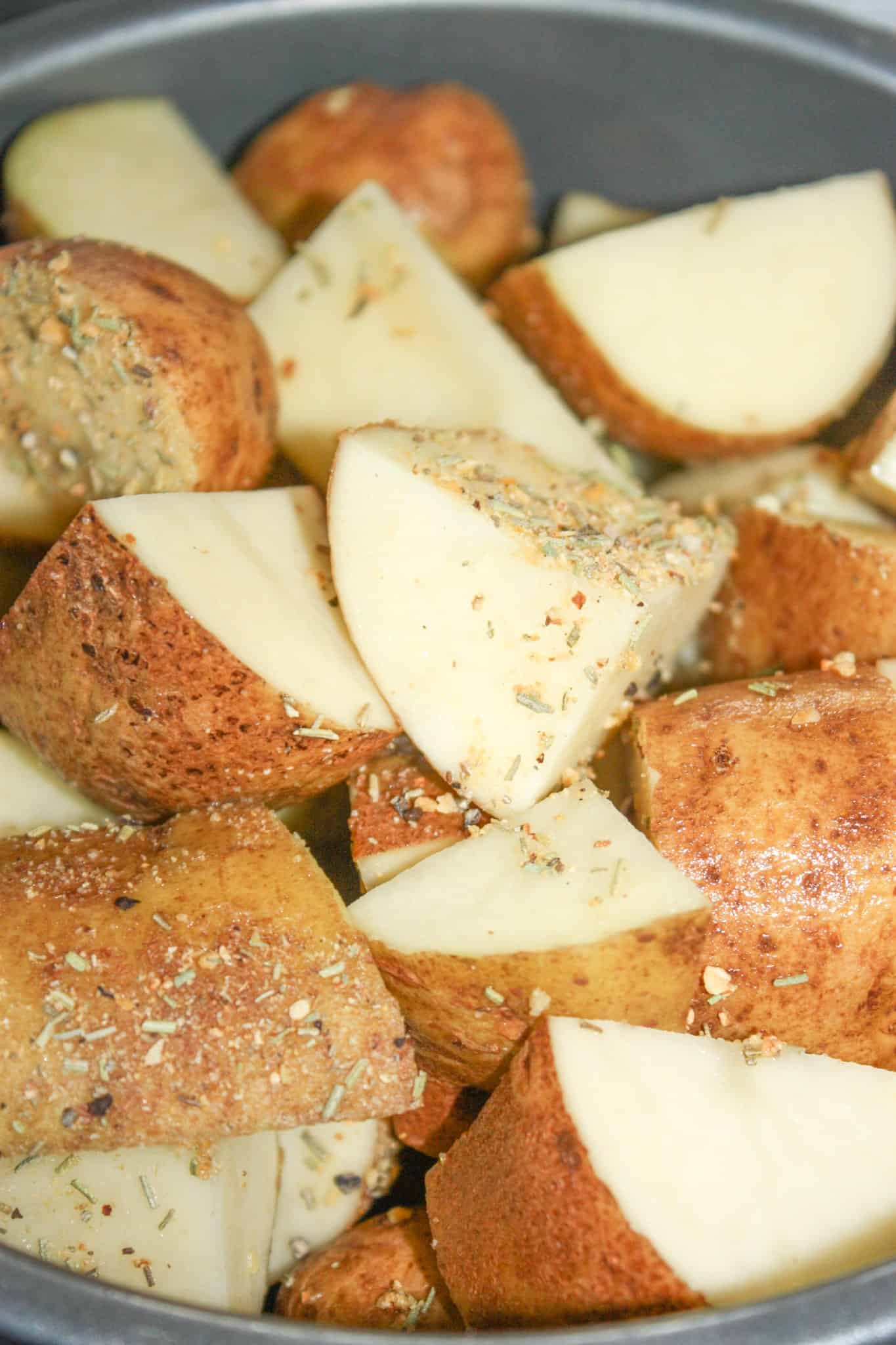 Then I put some olive oil into the Instant Pot and turned it to the Saute Normal function for 5 minutes to sear the tenderloins. 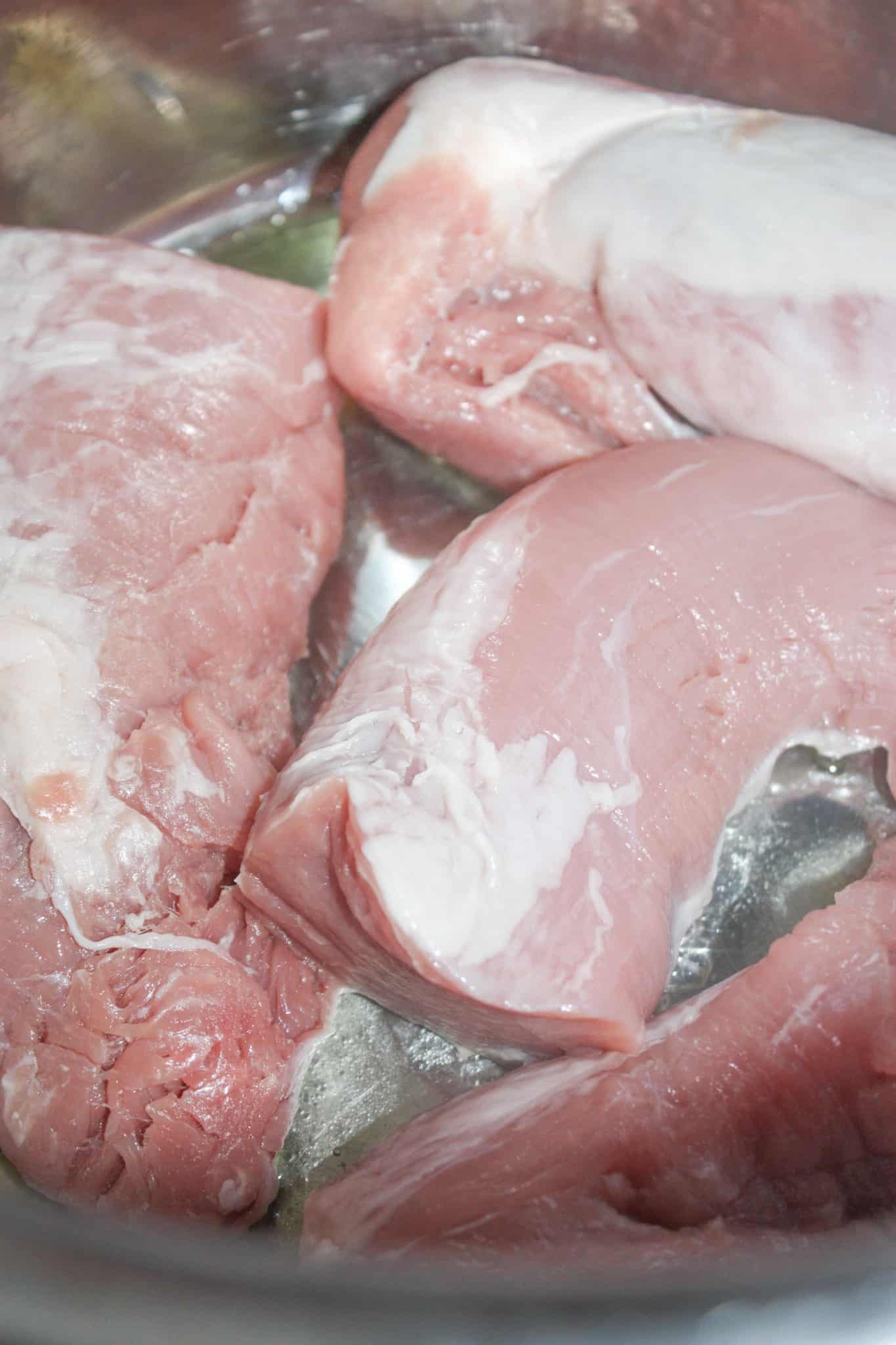 After searing the tenderloins I transferred them to a plate so I could deglaze the Pot. 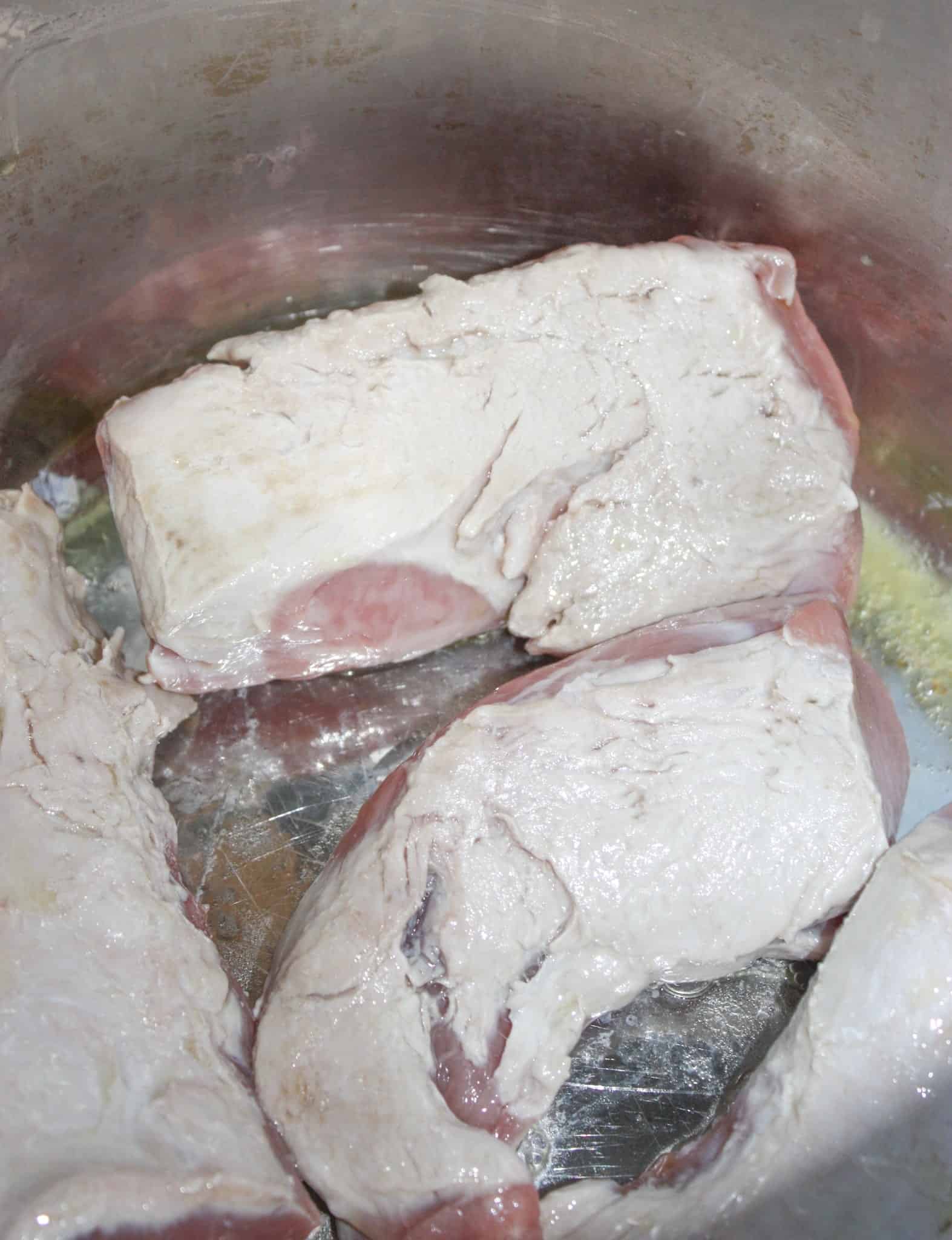 Next I added some water to the Pot and used it to scrape any food bits from the bottom.  This deglazing step is very important so you avoid the Burn message when the Pot is coming to pressure. 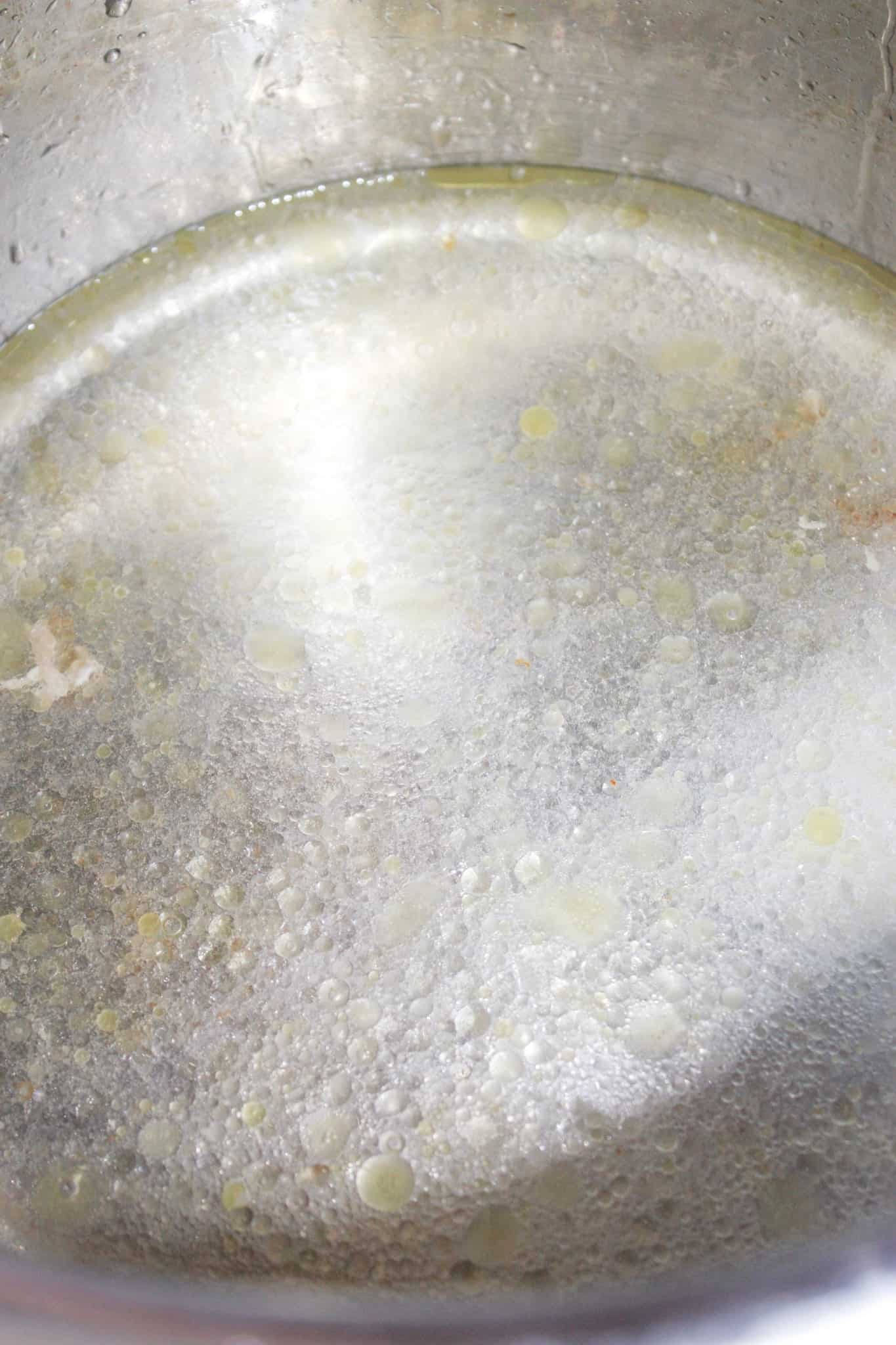 After deglazing the Pot I dumped in a pint of fresh blueberries. 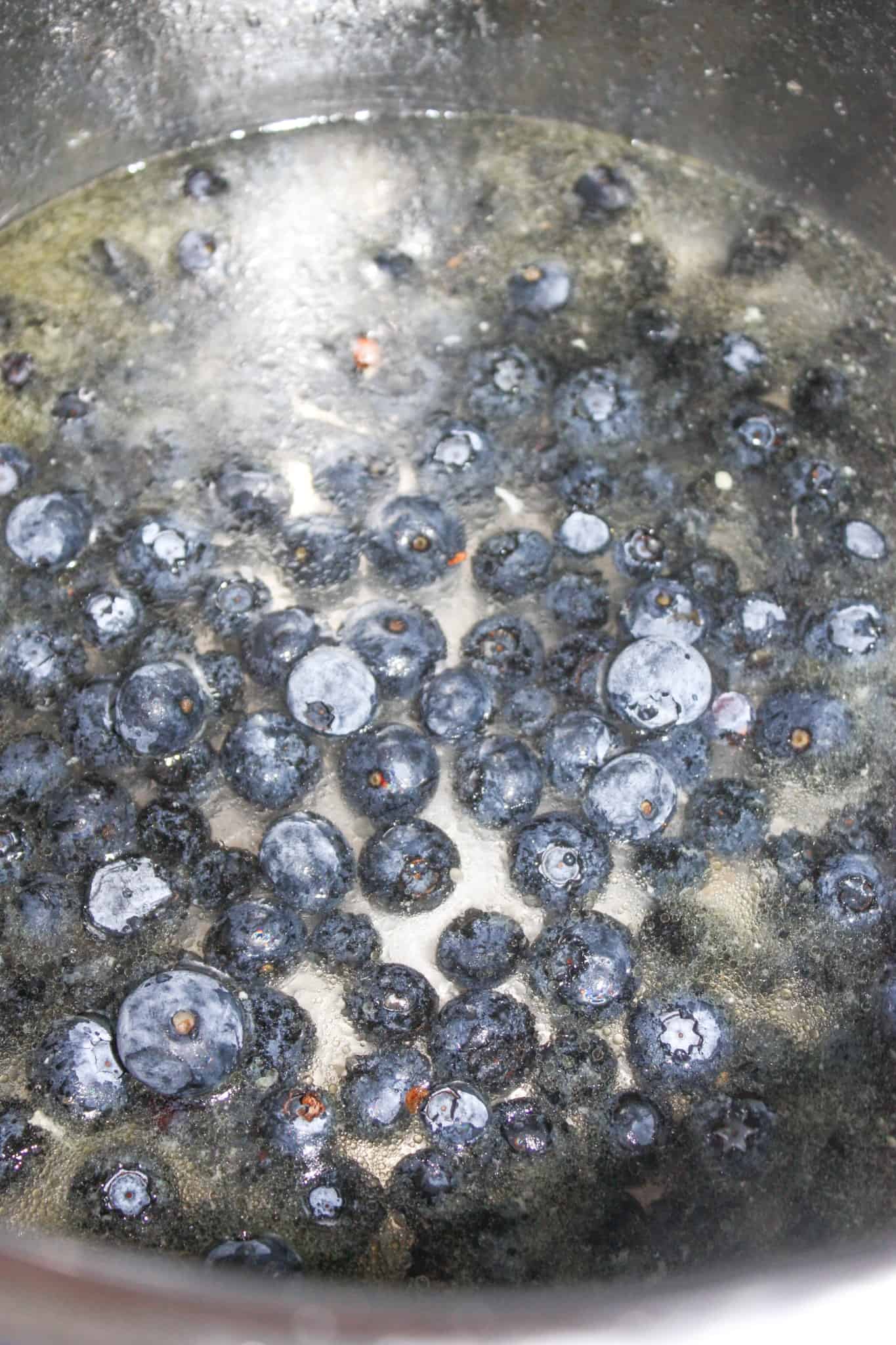 Then I added in the chopped apple that I had set aside earlier. 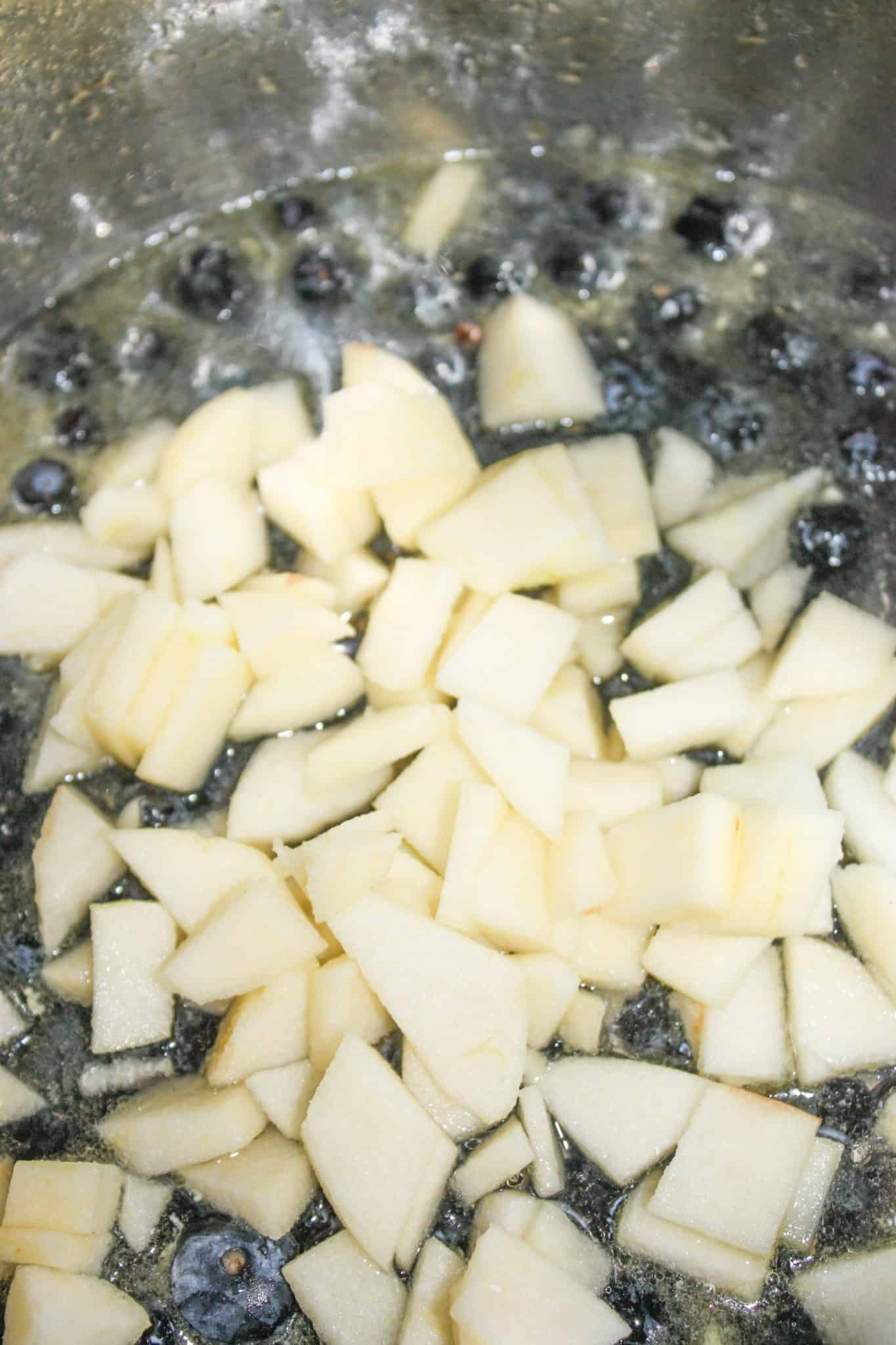 I seasoned the fruit with a bit of cinnamon and some salt. 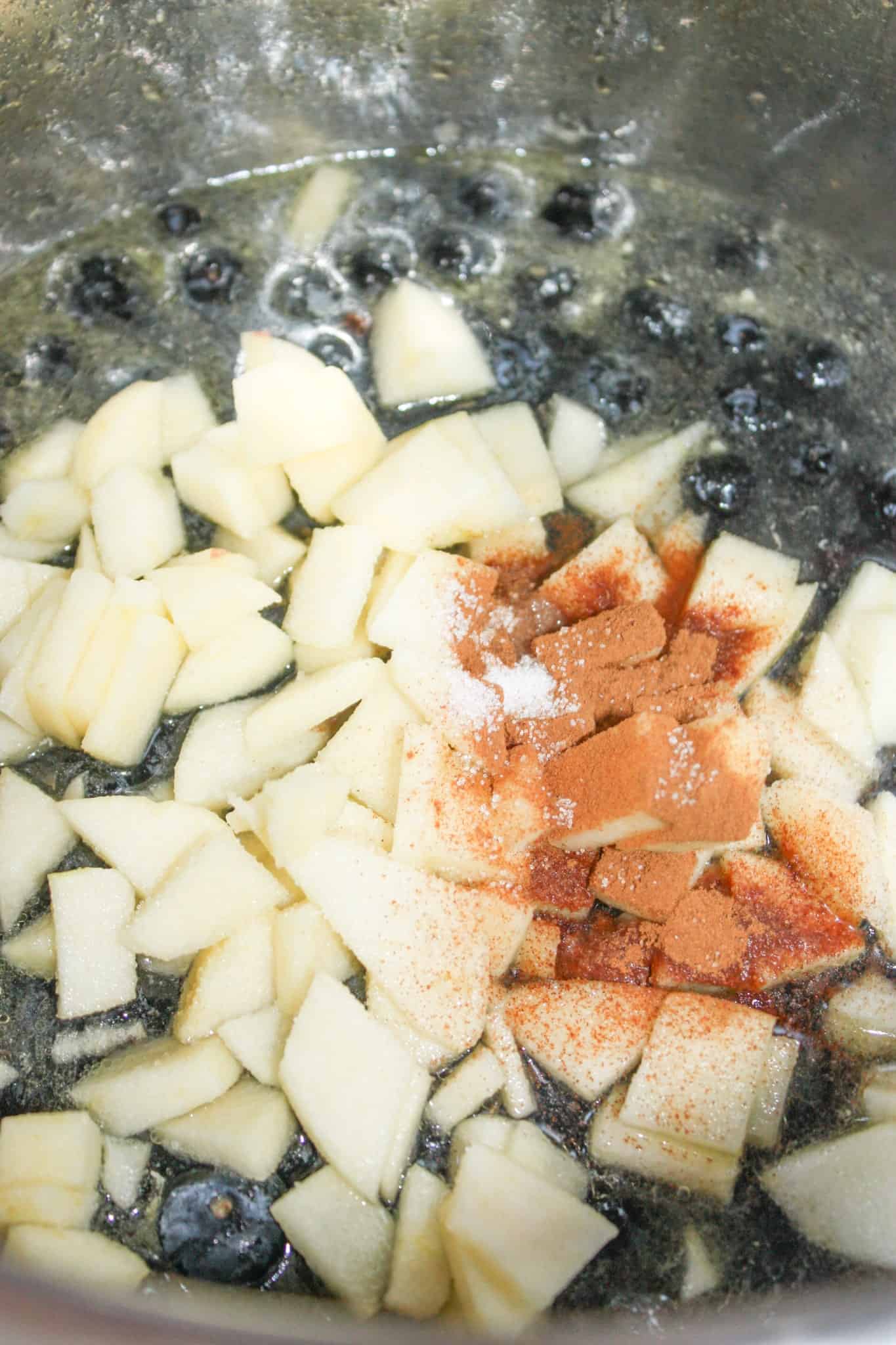 I stirred everything together. 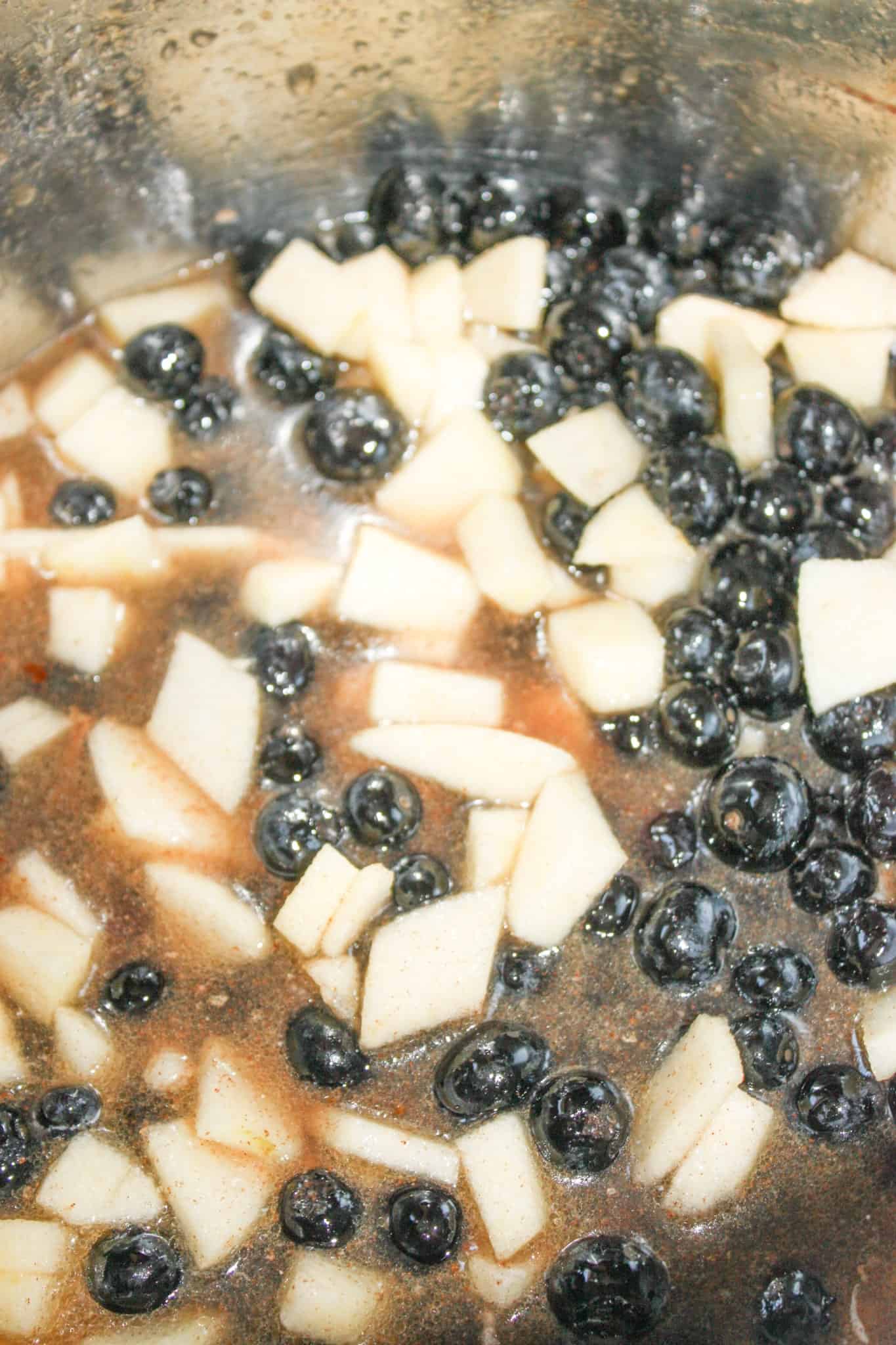 Then I added the trivet for the Instant Pot and placed the meat on top of it. 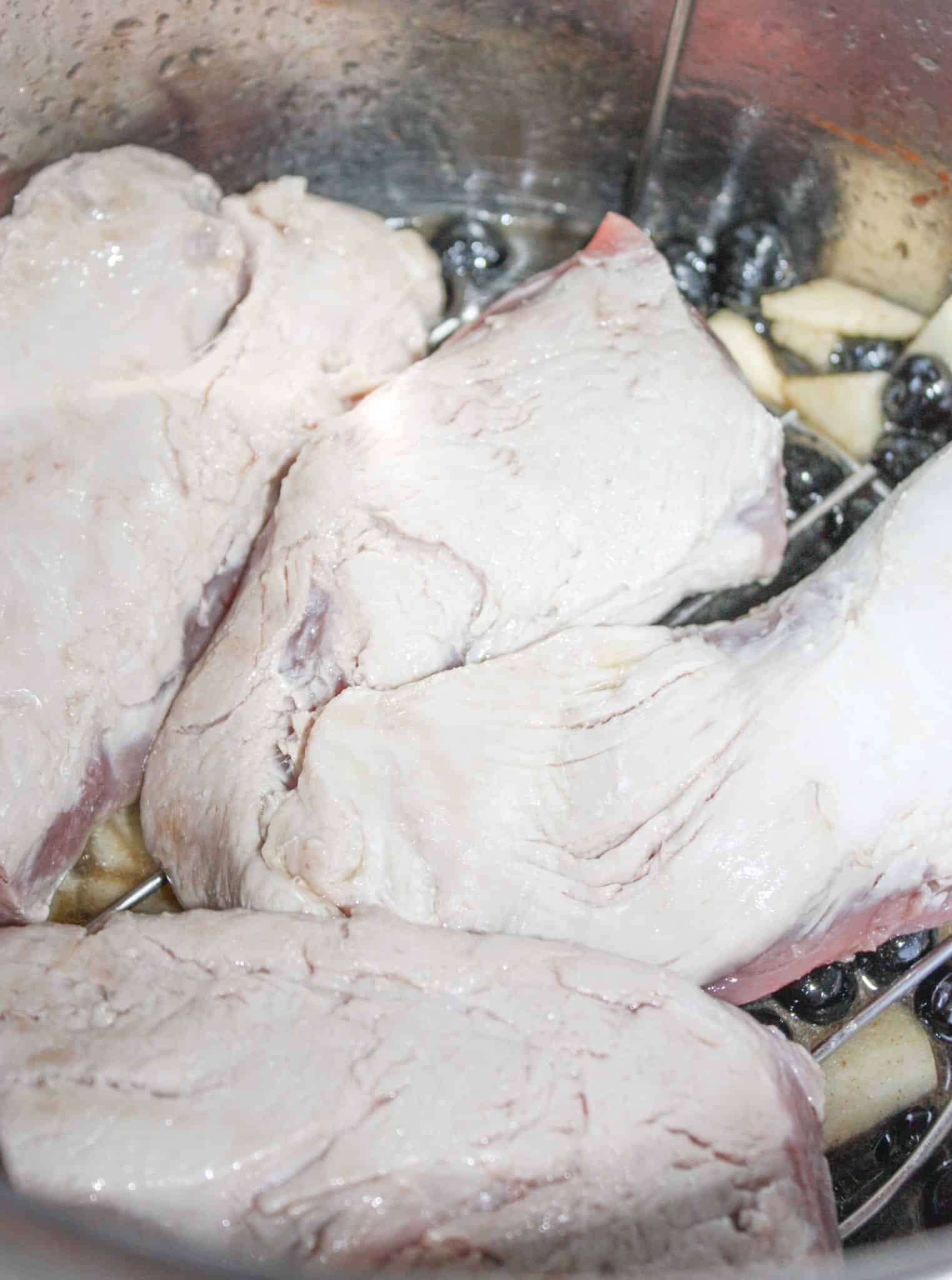 I covered the seasoned potatoes with tinfoil and then placed them in the Pot on top of the meat.

Then I placed the lid on the Instant Pot, turned the steam release handle to the sealing position and set the Instant Pot to Pressure Cook High for 3 minutes.

Once the Instant Pot Was done cooking, I allowed it to do a Natural Release for 8 minutes before turning the steam release handle to the venting position.

Then I removed the lid, carefully lifted out the potatoes and the trivet with the meat on it.  I covered the meat loosely with tinfoil and left the potatoes covered.

Next I used a large splatter guard (a great fit for the Pot and very inexpensive from the Dollar Store) to drain off some of the liquid from the Pot.  It is up to you how much you drain off.  Your finished sauce will be up to your personal preference. 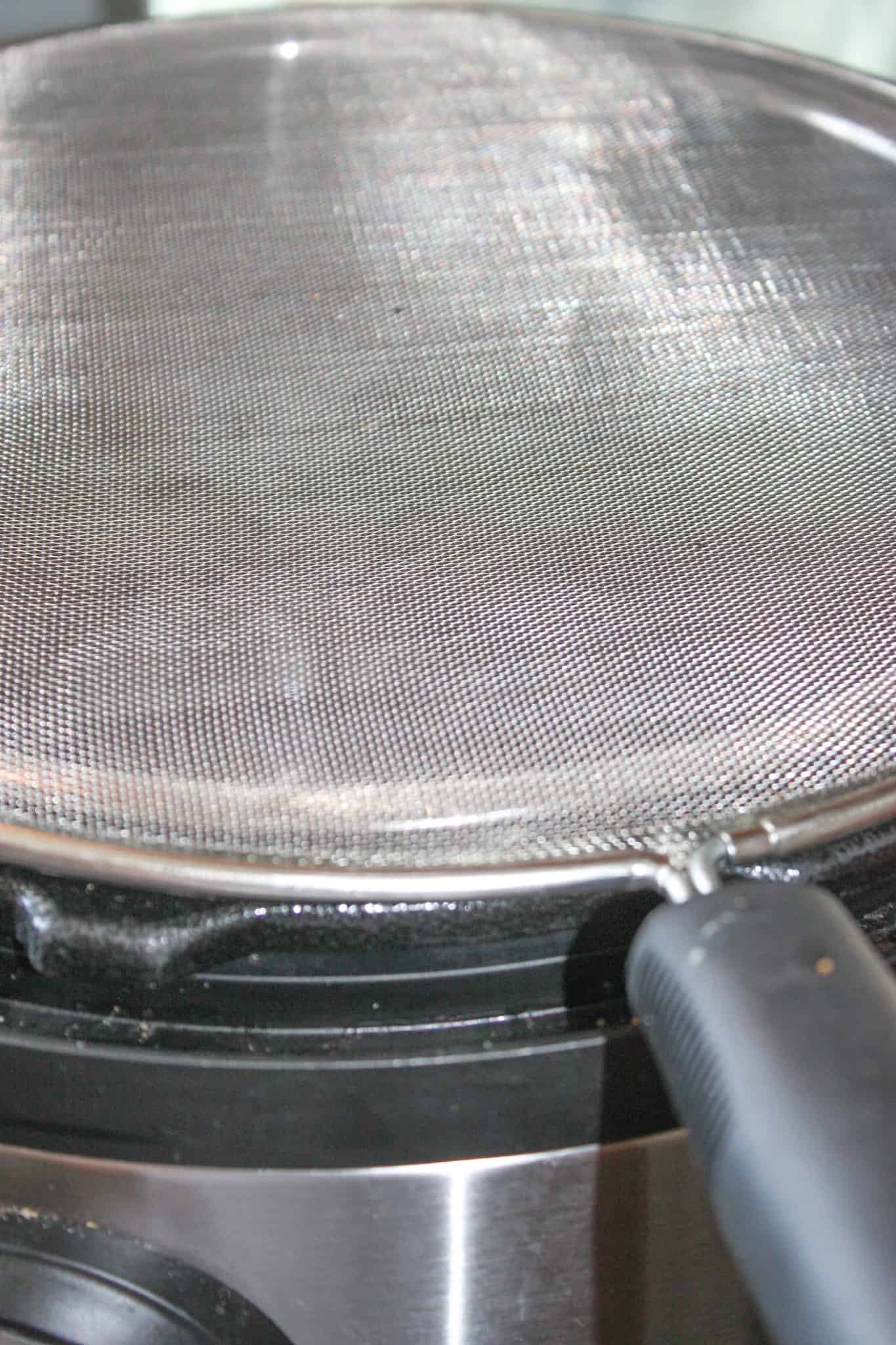 I turned the Pot back on to the Saute Normal function for 5 minutes and let the sauce boil down a bit.  I wanted it thicker so I added a slurry made with 1 tablespoon of corn starch and a bit of water.  You decide if this step is necessary for your sauce. 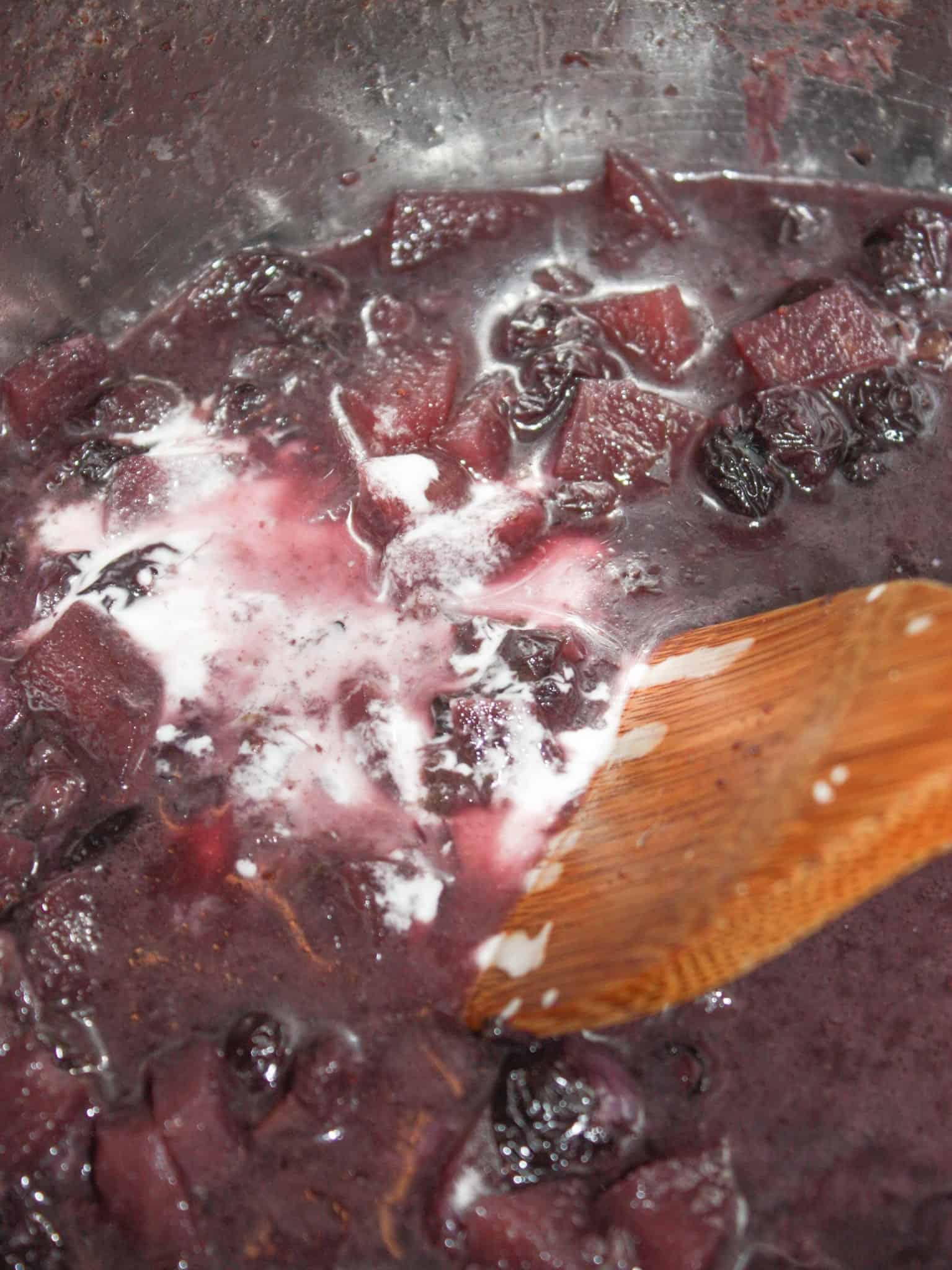 Next I sliced the pork tenderloins to get them ready to plate.  They were very moist. 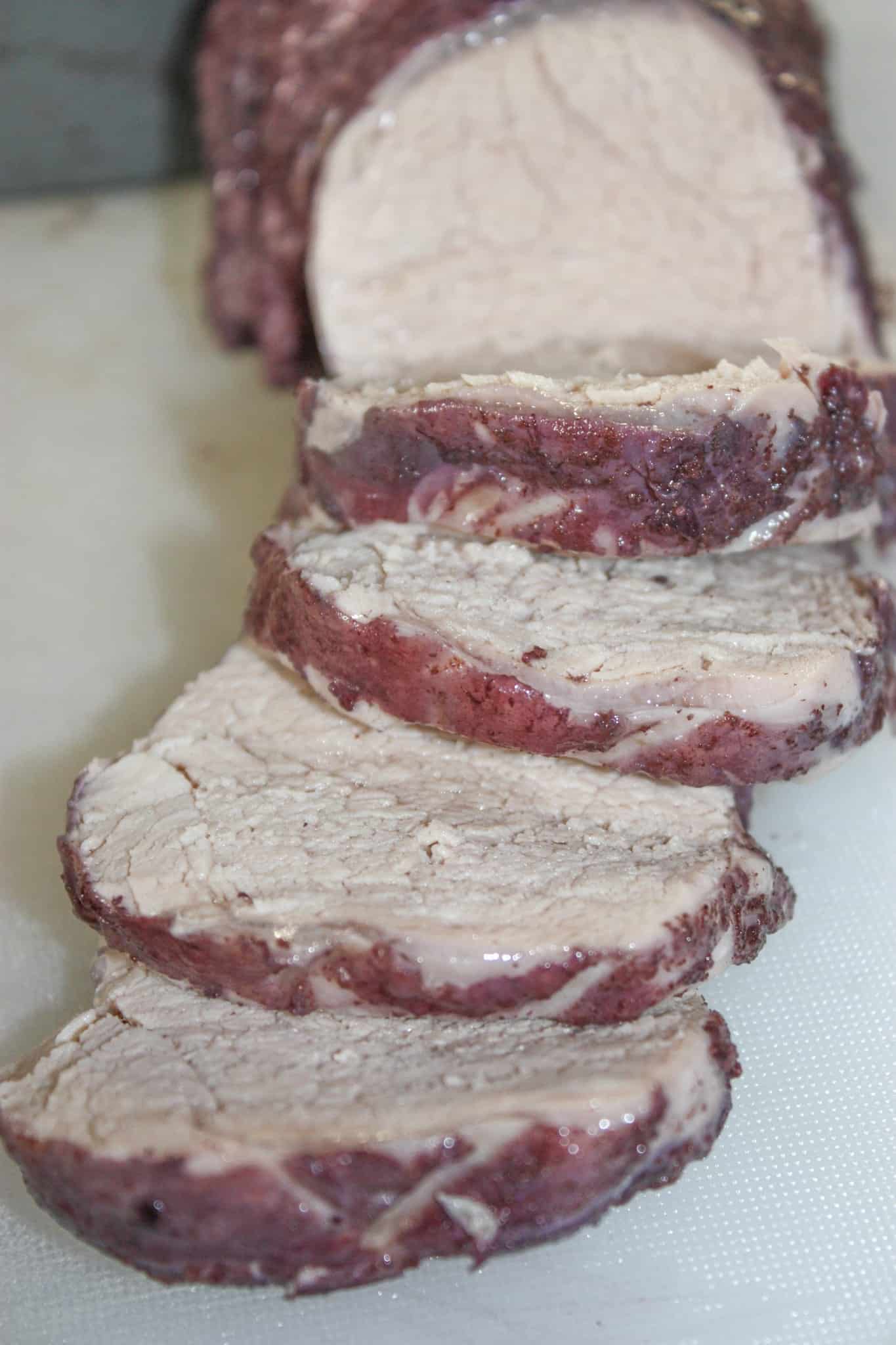 Then I placed the slices on a plate and smothered them in the blueberry apple sauce. 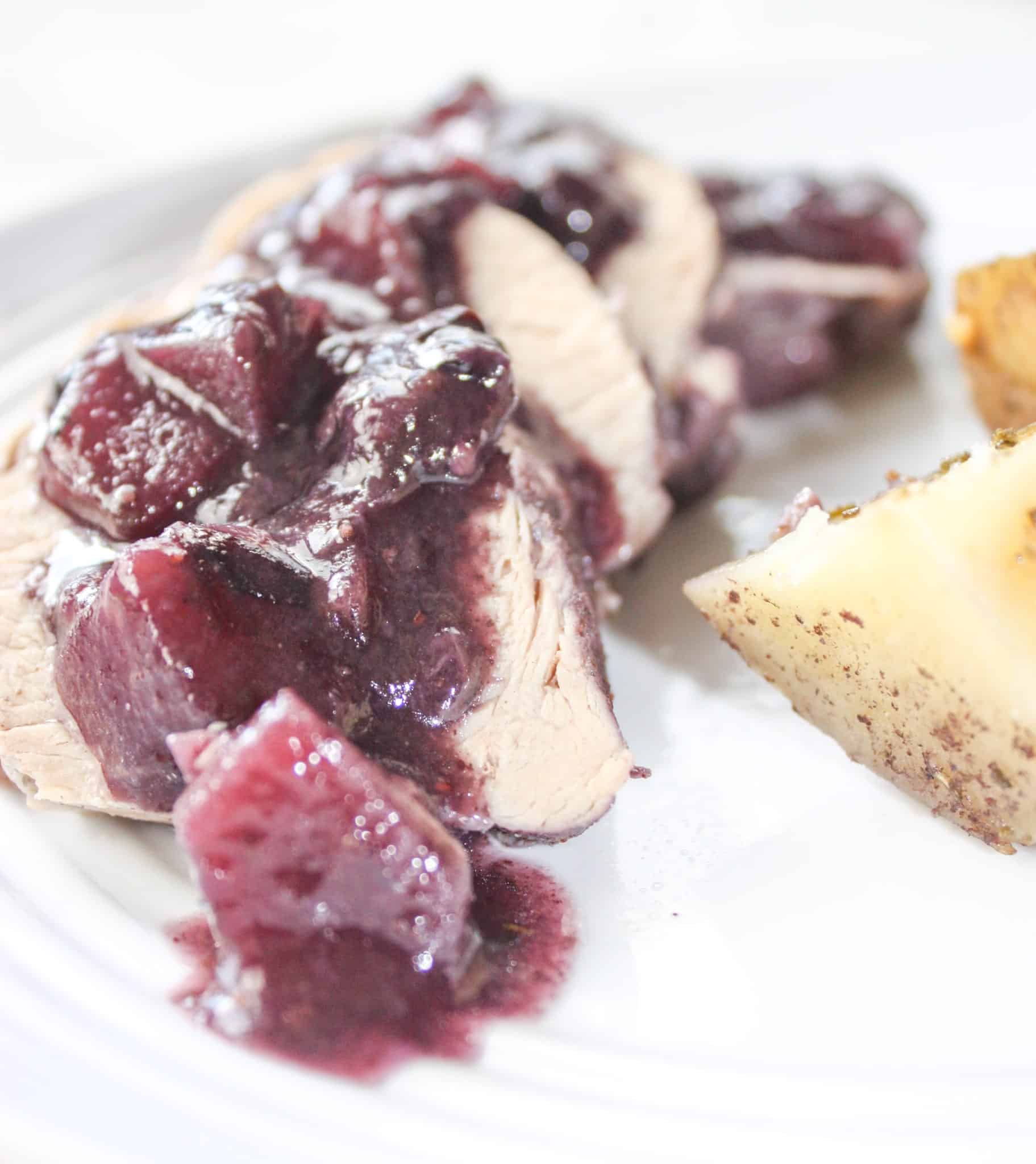 I removed the tinfoil from the seasoned potatoes and served them on the side.  You could finish off this meal with your favourite salad or vegetables.

Instant Pot Blueberry Apple Pork Tenderloin & Potatoes is a delicious meal that can be ready in under an hour.

Enjoy this perfect pairing on a special occasion or treat yourself to this eye pleasing and tasty recipe any night of the week. 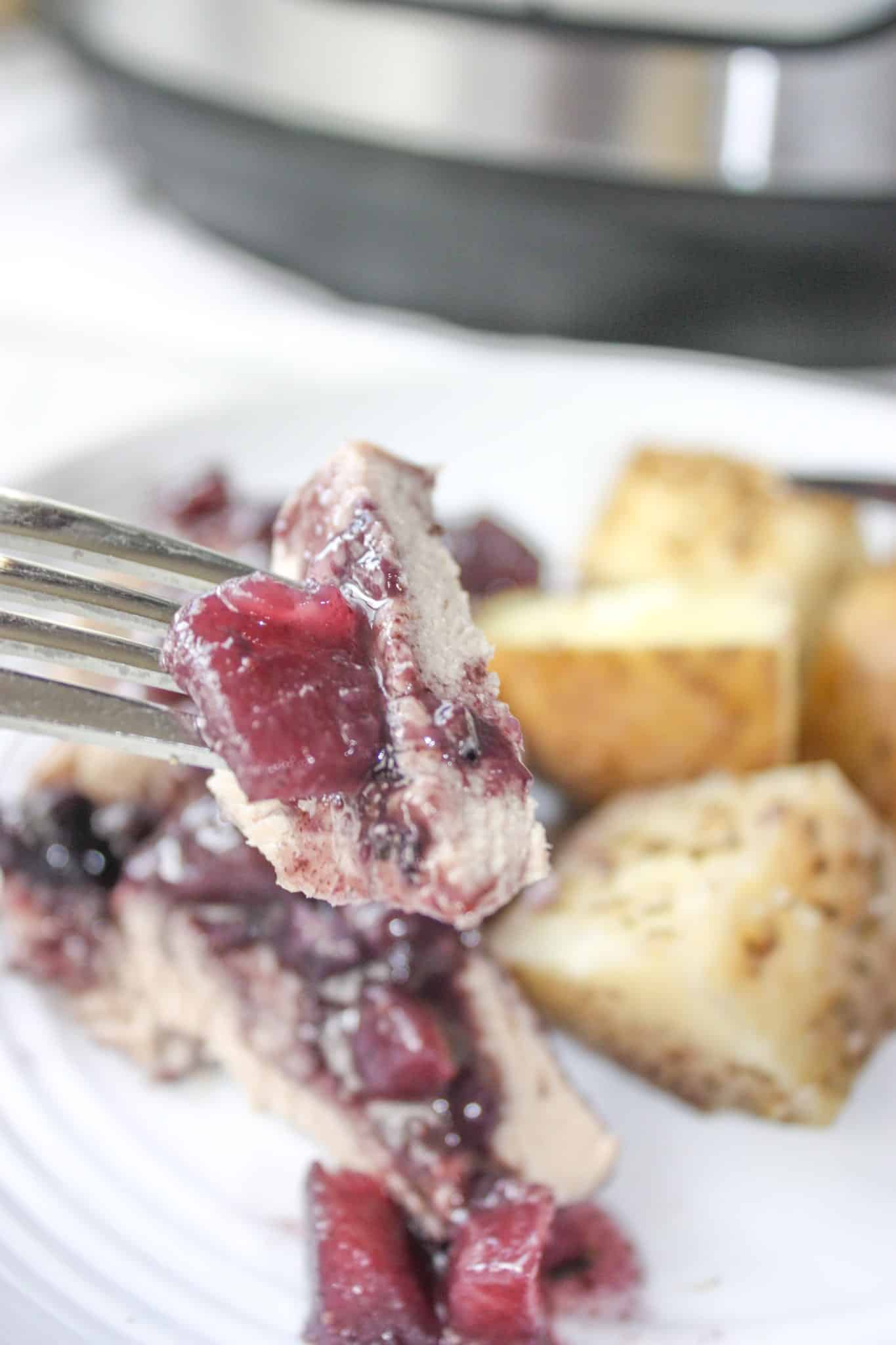 More Pork Recipes You Will Love… 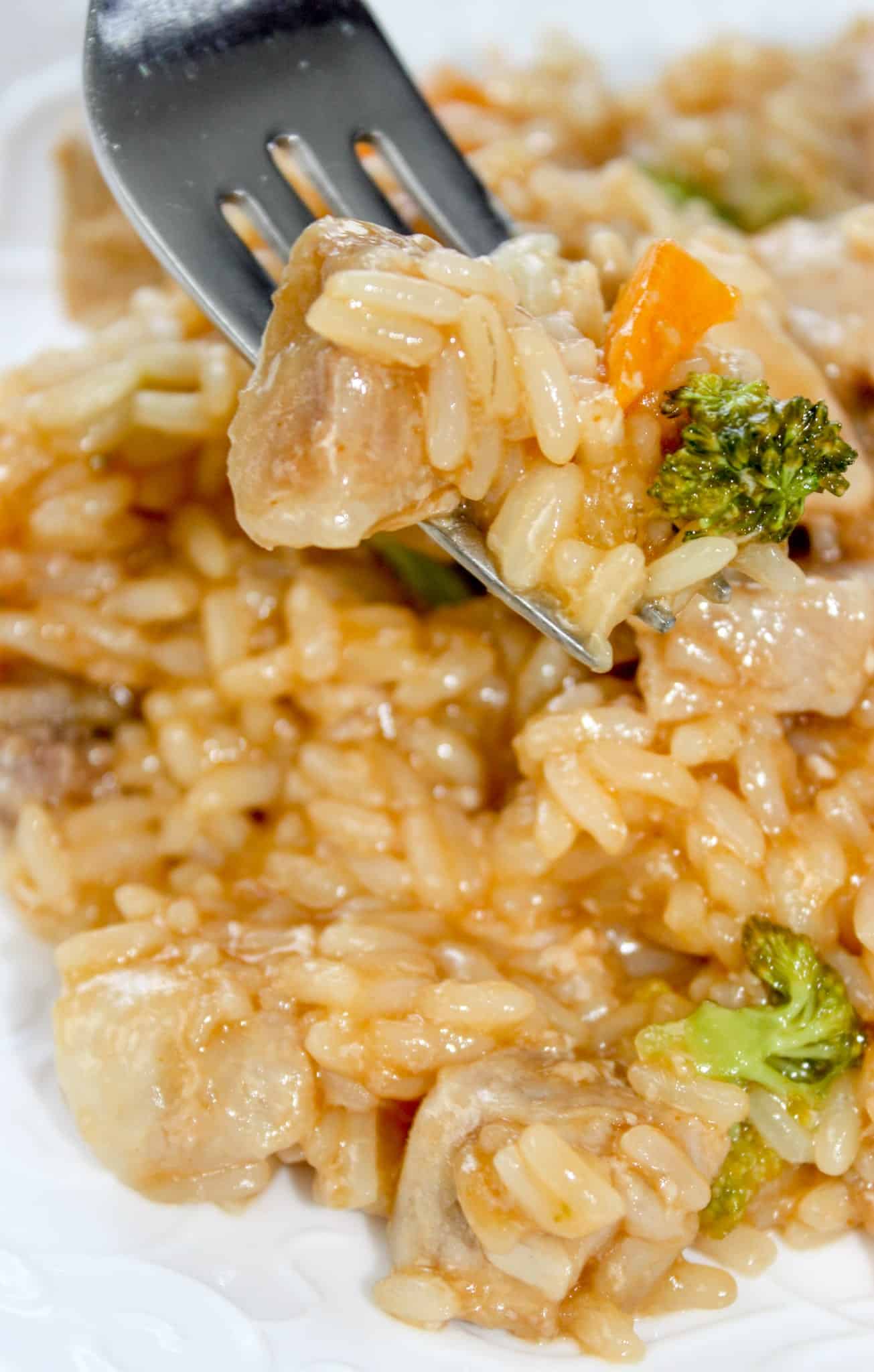 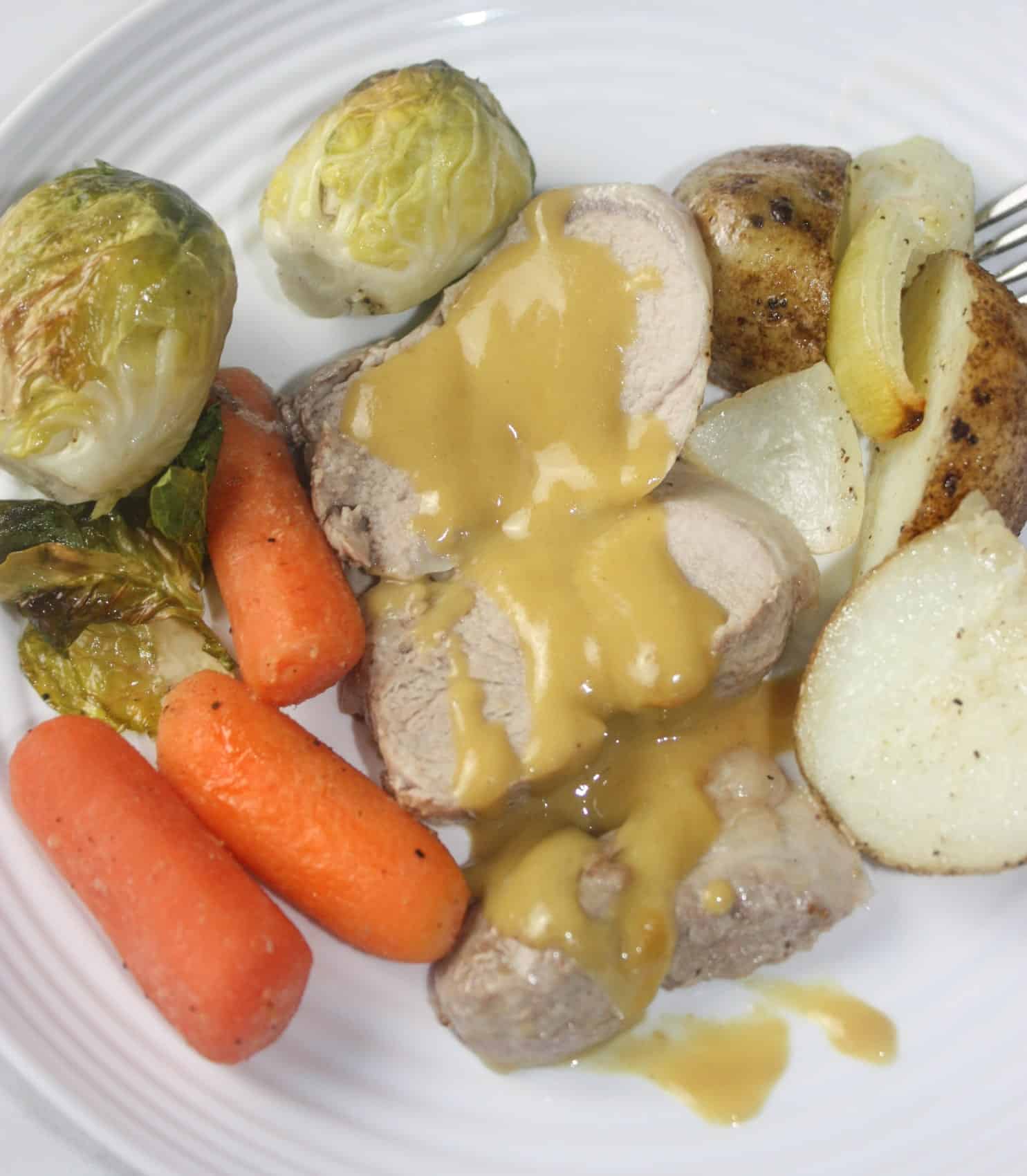 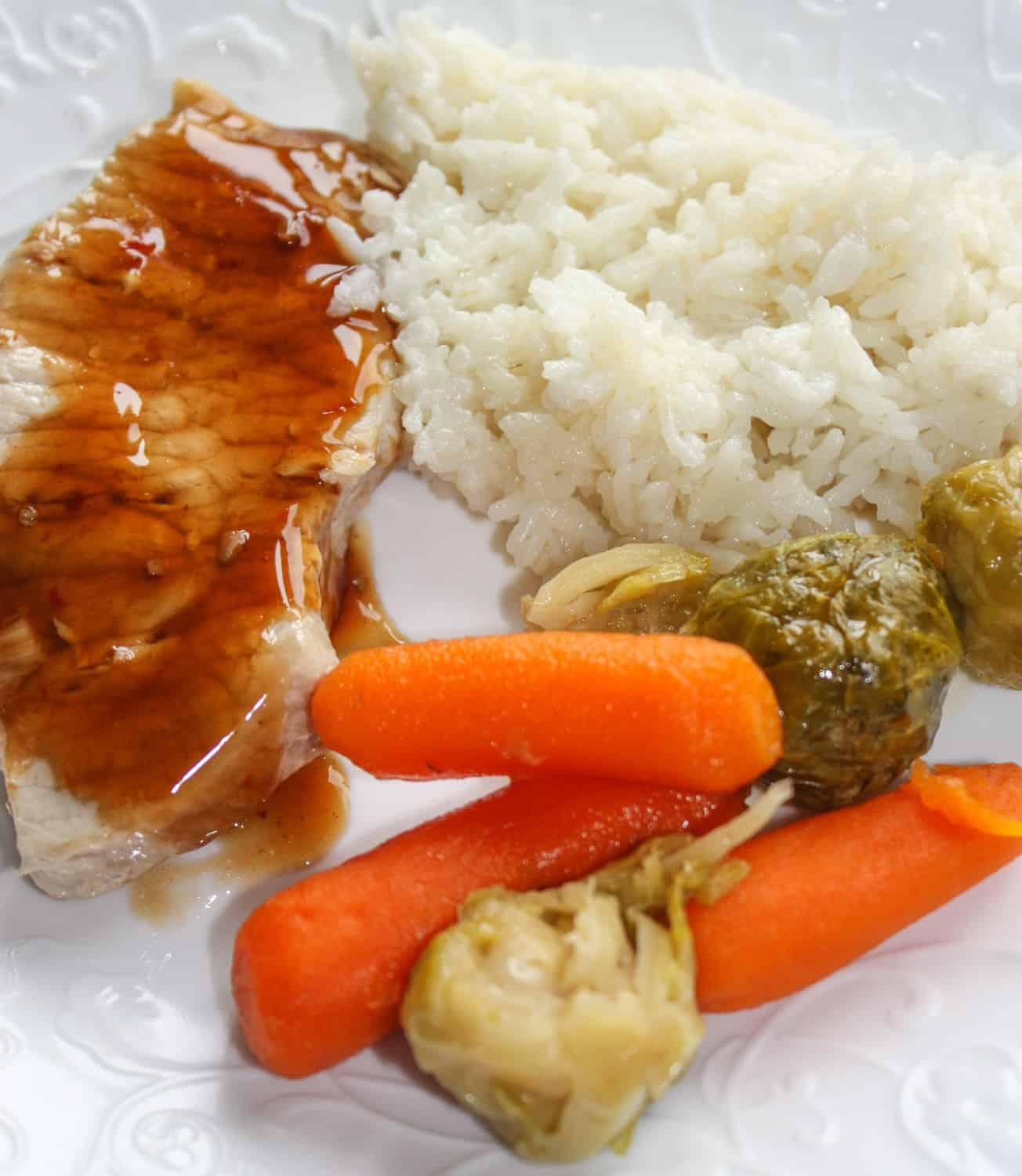 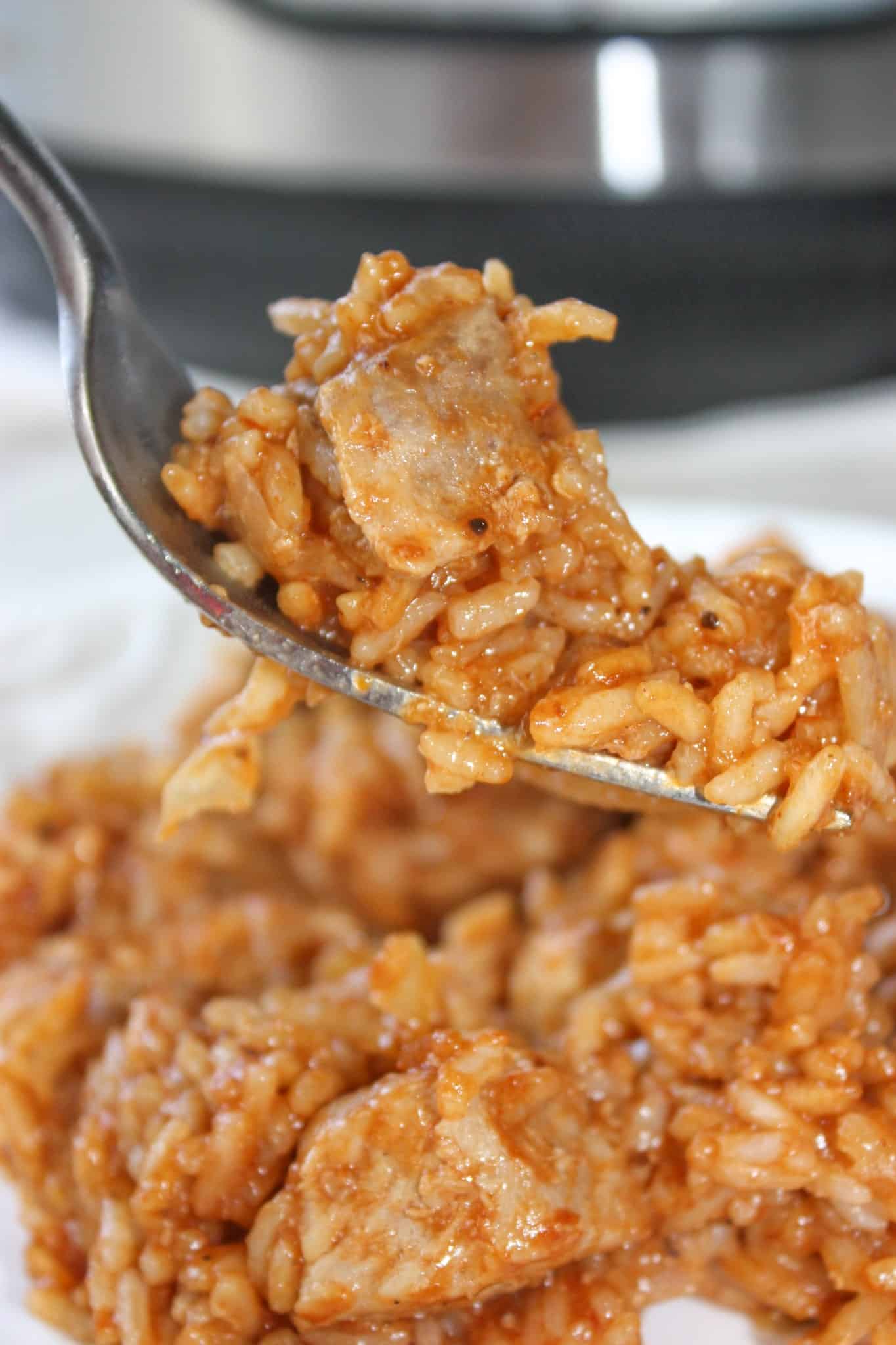 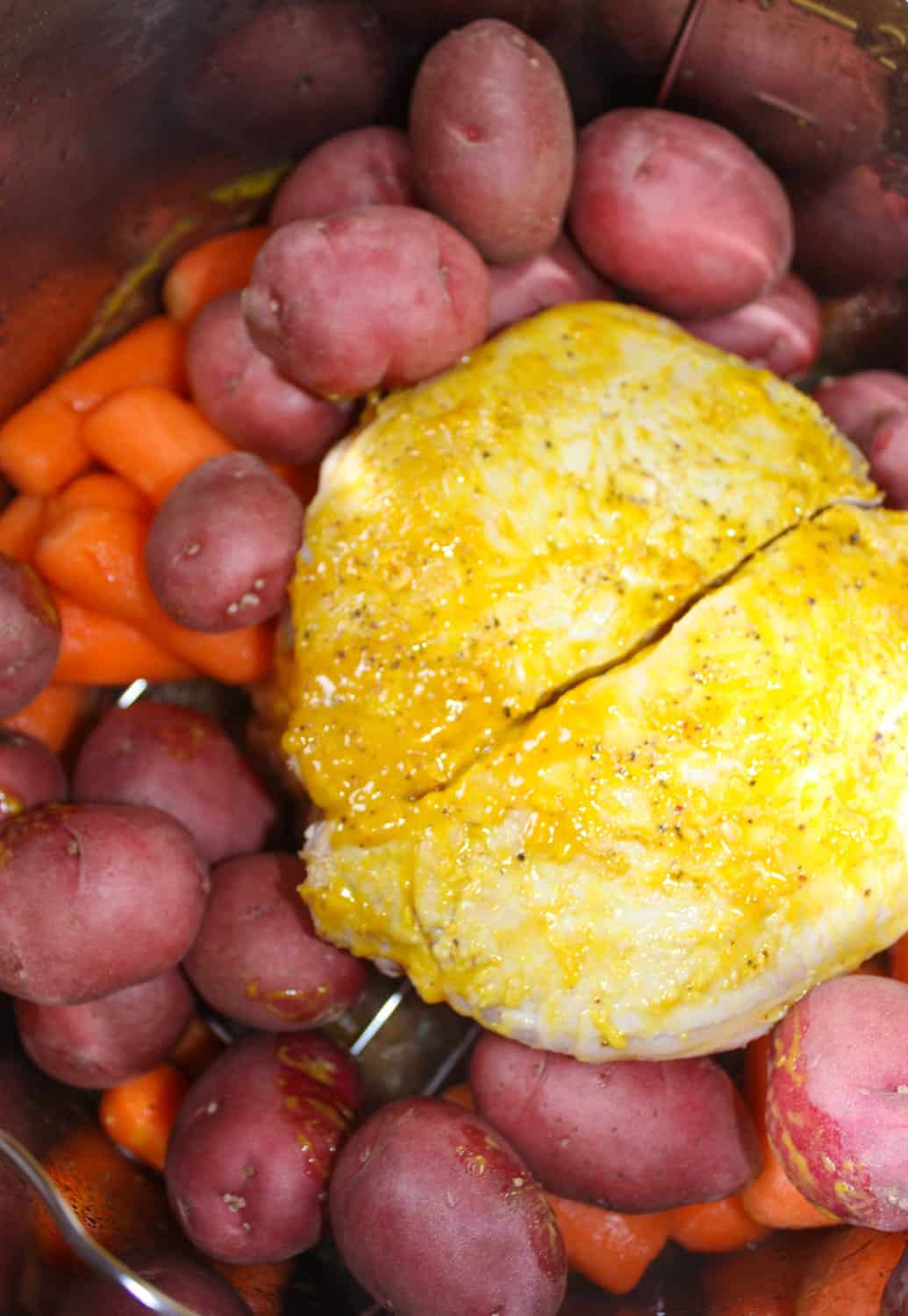 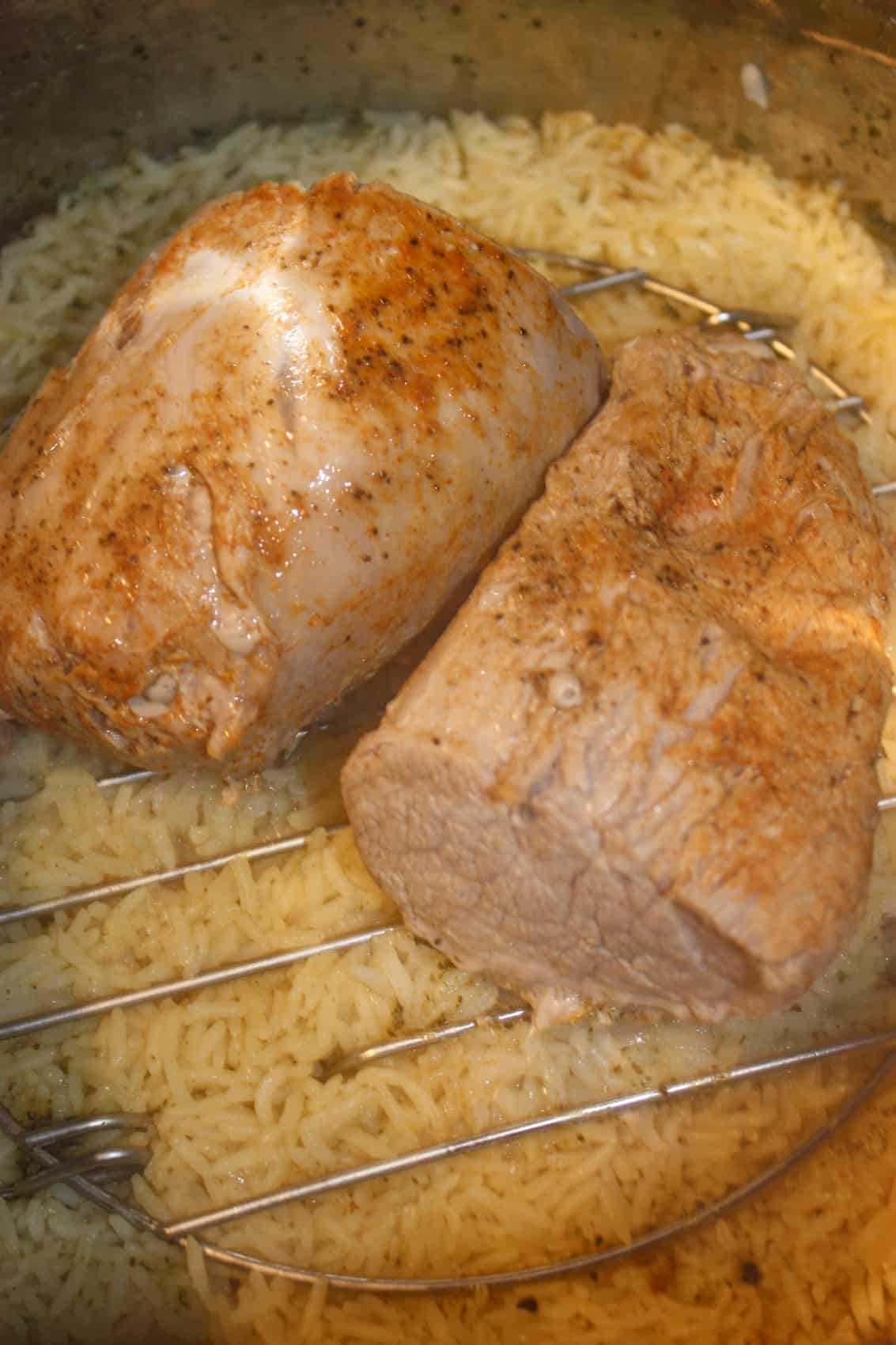 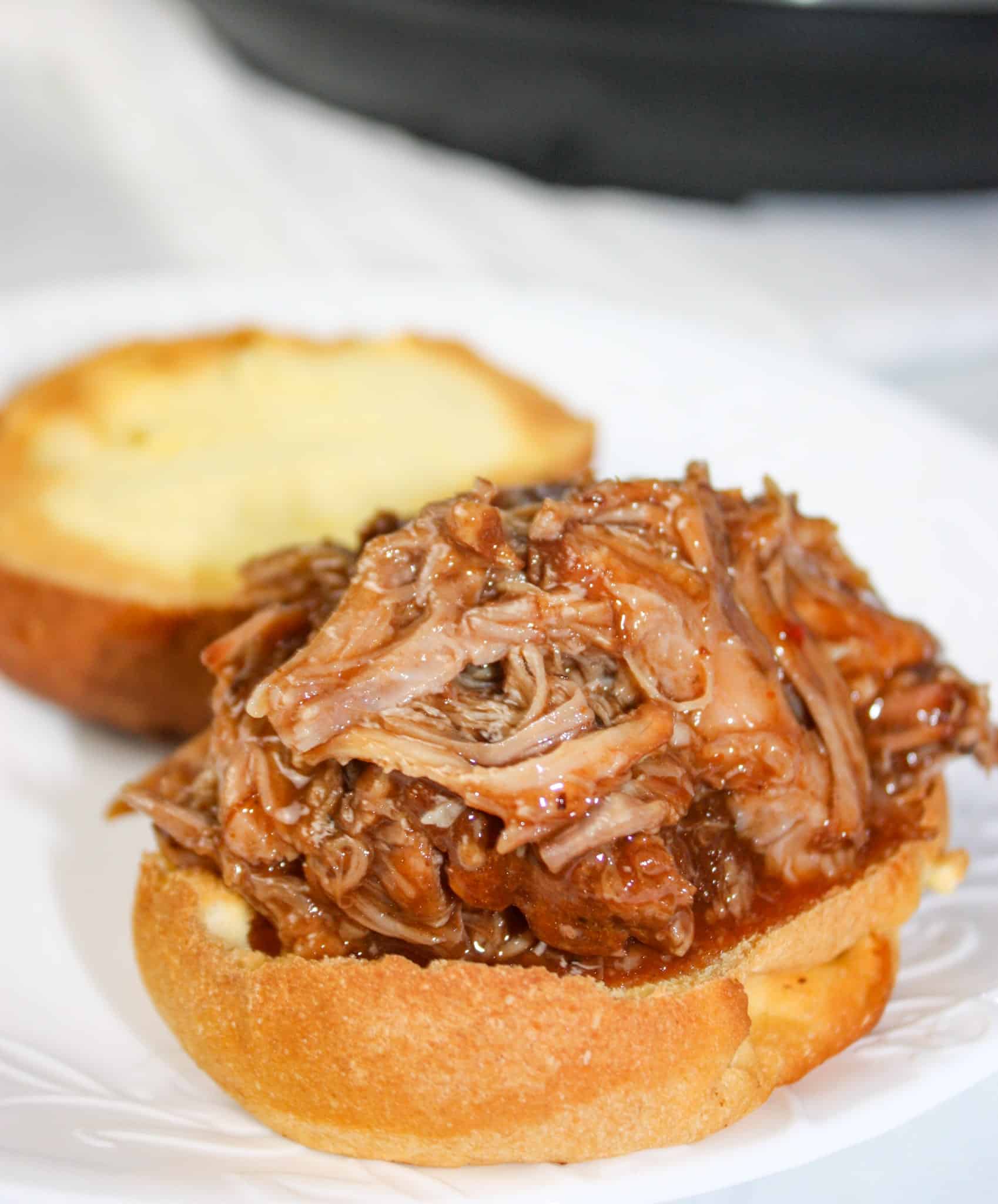 *This recipe was tested in a 8 quart Instant Pot Duo.

1-1/2 cups of water is listed in the ingredients twice .... is this an error or do you actually use 3cups of water total?

Hi Barbara, Thank you very much for letting me know about the error in this recipe. I have updated the recipe card. It should only be 1 1/2 cups of water. Take care, Kathleen